Aamir Khan amazed us with those science experiments in the blockbuster “3 Idiots”. His "Phunsukh Wangdu" character is one of the unforgettable characters in the film.

Sonam Wangchuk, the inspiration behind Aamir Khan's character in “3 Idiots” what he’s doing for the environment is excellent!

Sonam Wangchuk is a 50-year-old engineer from Ladakh, has been attempting to solve the problem of lack of water for agriculture in the desert landscapes of the western Himalayas by building "Ice Stupas".

He has gained global recognition bagging the renowned Rolex Awards for Enterprise 2016.

The awards were conferred on to those "who have reshaped the world with their innovative thinking and dynamism" Tuesday in Los Angeles. Mr. Wangchuk’s "Ice Stupas" project is among the five winners this year at the awards. His project is a far-fetched attempt at solving water shortage for agriculture in the western Himalayas. Ice Stupas are artificial glaciers made out of meltwater that will be used to water the fields.

"The Rolex Award funds will support the project and promote Ice Stupas as a climate-change adaptation and desert-greening technique," Mr. Wangchuk said in a statement released by Rolex.

The people of Ladakh mainly depend on farming but have been struggling hard to fight climate change over the past few decades. To battle the situation, Mr. Wangchuk has built ice stupas that store winter water in the form of 40-metre-high mountains made of ice. These act as glaciers during winter and provide enough water to irrigate 10 hectares of land.

Mr. Wangchuk 's project started two years ago. Today the desert landscape has transformed to green, and the level of groundwater in the area has flourished significantly too. Talking about his work Mr. Wangchuk said,"I’m not doing anything revolutionary. It is ninth-standard science put to use. We mountain people have to find new ways to work with nature, not against it." 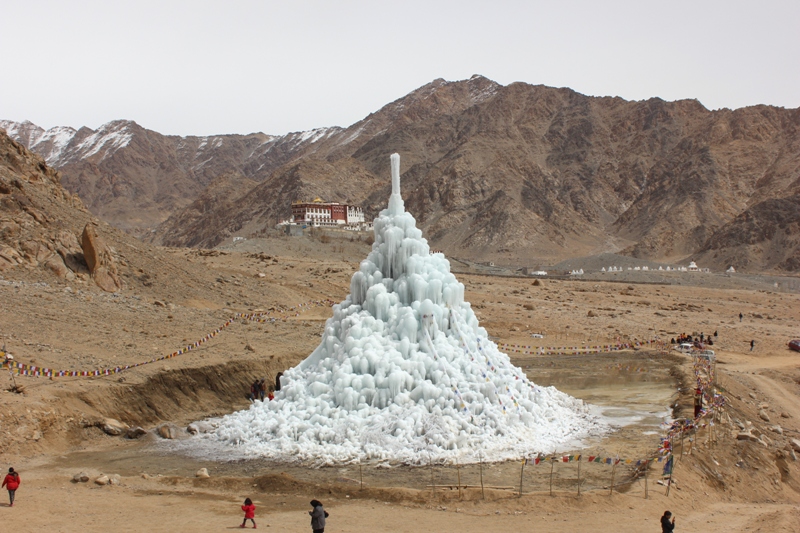 Collaborating with the government of Jammu and Kashmir, he has changed textbooks for state-run schools in Ladakh, making them accessible to students in their language.